Peeping through the viewfinder of my camera, snapping repeatedly at the dramatic mountain scene in front of me, the thin, oxygen-depleted air rasped against my larynx. In the distance, an ornate Buddhist temple glinted next to an icy river, and further beyond, a burgundy and silver gilded palace clung to the mountainside. I’d touched down at Bhutan’s tiny international airport in Paro just 30 minutes before, but already I was being gobbled up by a landscape, too vast for my wide-angled lens.

Home to just 750,000 people, Bhutan has long been portrayed as an enigmatic and isolated Himalayan kingdom in which an innately Buddhist quest for happiness is famously championed over wealth. A hefty $250 daily fee is levied on visitors, with the intention of sustaining a model of high-value, low impact tourism – but that does include accommodation, meals, transport and a personal guide.

Measuring prosperity in GNH (Gross National Happiness) instead of GDP (Gross Domestic Product) was a concept introduced by the revered former monarch Jigme Singye Wangchuck in the 1970s, and 2015 has served as Visit Bhutan Year to honour his 60th birthday. He abdicated in 2006 but is still known unequivocally as “The King”. He and his family remain Bhutan’s big-hitting, tourist-pulling trump card. Festivals of dance and archery (the much loved national sport) have been held all year, alongside an international campaign to attract more foreign tourists.

“The national love for the King,” I said to my guide Dorji, as we sat in a tiny restaurant and sipped a traditional butter tea made from yak milk, salt and butter in the shadows of Thimpu’s Royal Palace. “Isn’t it just a tourist gimmick?” As Dorji pondered my scepticism, a motorcade of flashing lights and blacked-out windows whizzed past, almost perfectly on cue. “That’s probably the King now,” said Dorji, through his betel-nut stained smile. “Or at least the Prime Minister.”

That night, at a nearby karaoke bar, I put the same question to a student named Tsheltrem. Despite being half Dorji’s age and having grown up in rural Bhutan, far away from the capital, she gave a very similar response. “I’ve been lucky to travel outside Bhutan,” she told me. “In other countries it’s normal for people not to like their monarchy, but here most people feel like they actually know them.”

The next day at Thimpu’s Chorten Memorial, a stupa built to commemorate the reign of the current King Jigme Khesar Namgyel’s great grandfather, I joined hundreds of Buddhist devotees as they recited mantras and completed laps around its tall golden spires. Huge photos of the King sat side by side with those of the country’s equally cherished Buddhist leaders as the scent of jasmine incense wafted aver the low-rise city.

Close by, a dapper policeman politely waved vehicles through the city’s equivalent of Oxford Circus – there are no traffic lights here. Planning law, too, also prohibits any new buildings that fail to remain in keeping with the existing architecture of the area. IT companies, administrative centres and hospitals are largely hidden behind intricately engraved wooden buildings and beautifully ornate stone masonry.

Beyond Thimpu, a sparsely populated, pastoral landscape rolls west for hundreds of miles towards a wall of serrated Himalayan peaks. This is the region where most one-week tourist itineraries finish up due to its proximity to the capital, but two new trekking routes through Phrumsengla National Park will open in January, for those in search of somewhere even more isolated. 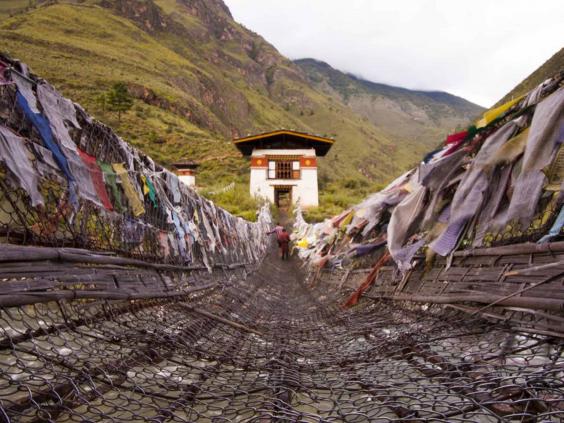 Dorji had also arranged for me to visit a farm where I could try my hand at archery. The expertly crafted bamboo bow and steel-tipped arrows creaked as I took aim at a dinner-plate sized bull’s-eye some 100 feet away. It took me about 50 efforts to hit it – at which point I decided to quit with all my eyes, ears and limbs intact.

The King’s cherished place in the hearts of the Bhutanese population doesn’t wane as you stray from the capital. Dozens of well-known anecdotes circulate among the rice paddies and foothills, praising the regular “walkabouts” undertaken by the monarch, in which he disappears,  sometimes for weeks, into the country’s heartland. My favourite was a story about him arriving unannounced at a busy festive lunch in a mountain village. He politely ordered the women to take the rest of the afternoon off, made them a cup of butter tea, then finished all the cooking himself.

“This is the most sacred place in our country,” said Dorji, as we snatched a precious lungful of air at the entrance to the staggering and much-photographed Tiger’s Nest temple, west of Thimpu. It had taken us three hours to reach its grand wooden doors alongside hundreds of breathless Buddhist pilgrims dressed in maroon robes with delicate gold trim. “The King has also followed this path on many occasions,” he told me. “We are following in royal footsteps.”

Built in the late 17th century to commemorate the man believed to be responsible for introducing Buddhism to Bhutan, Guru Rinpoche, the Tiger’s Nest is a gravity-defying series of caves and shrines plugged into a mountainside, 10,240 feet above sea level. Legend has it that Rinpoche arrived at the site on the back of a flying tigress from Tibet before spending three years, three months, three weeks, three days and three hours in deep meditation. Buddhist monks still visit the site to contemplate the commitment to their faith while overlooking the valley.

Inside its gilded walls, we received blessings from monks and had holy water splashed into our palms. Huge depictions of current and former Buddhist lamas filled every corner of the temple – and unsurprisingly, hanging there proudly alongside them, was a life-sized photo of the King.

There are no direct flights between the UK and Bhutan. Return flights from Delhi to Paro start from £394 with Druk Air (drukair.com.bt).