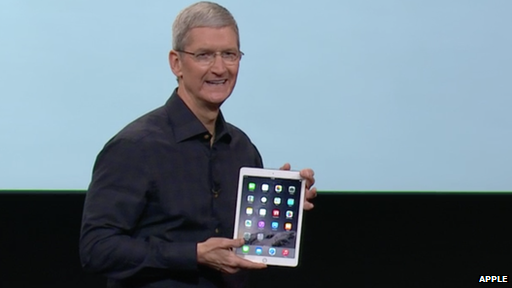 Apple has announced a new version of its tablet, the iPad Air 2, which it said was the thinnest device of its kind on the market.

It has an anti-reflective coating on the screen for the first time, and the A8X – a faster version of the processor featured in the firm’s latest iPhones.

However, some analysts have questioned whether the upgrade will be enough to turn around iPad sales.

An upgraded version of the firm’s smaller tablet – called the iPad Mini 3 – was also announced.

Like its bigger sibling, it gets the company’s fingerprint recognition component. But it uses the older A7 processor and has a lower-resolution rear camera. 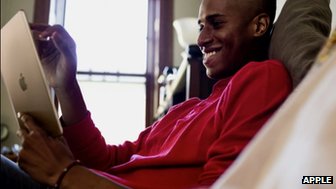 Some of the details were published by Apple, reportedly by mistake, on Wednesday.

Apple’s last earnings release revealed that it had sold 13.3 million iPads in the April-to-June quarter. That marked a 9% fall on its tally for the same period in 2013, despite the fact the company saw sales of iPhones and Mac computers rise.

It also contrasted with an 11% rise in the number of tablet shipments across the market as a whole – with Lenovo and Asus making some of the biggest gains – according to data from IDC.

The market research firm said that the iPad remained the bestselling tablet brand, but that its market share had dropped over the year from 33% to 26.9%.

One expert suggested that the recent launch of the 5.5in (14cm)-screened iPhone 6 Plus, which shares most of the new iPads’ features, could further temper demand. 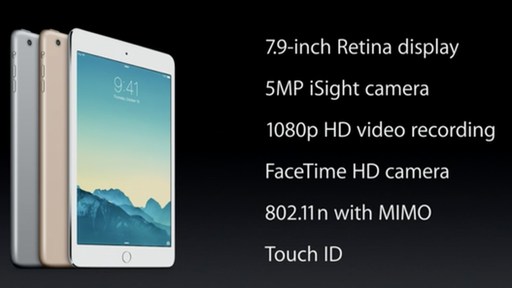 “Given that Apple’s launched larger iPhones, it needs to find a market that the iPad Mini fits into,” said Jitesh Ubrani from IDC.

“It was a response to the market as a whole moving to smaller tablets. And now that phablets are growing in not just screen size but also in market size, unless Apple carves out a special place for it, we expect sales of the Mini in particular to be cannibalised quite a bit.”

Apple’s chief executive Tim Cook has told investors he still believes that the tablet market will eventually surpass that of PCs, and has pointed to a recent deal with IBM – involving the two firms co-developing business-centric apps – as a way to get iPad sales on “a faster trajectory”.

Mr Ubrani agreed that targeting businesses had huge potential, but warned that sales to consumers would remain a challenge. 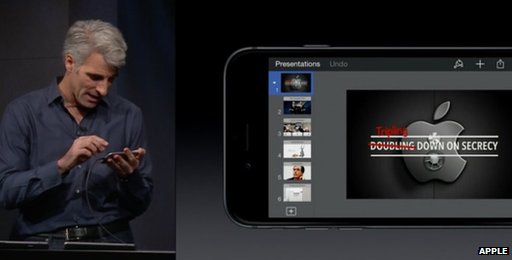 Apple joked about thwarted attempts to prevent leaks, during its press conference

“People who have the old iPad 2 or more recent versions are still happy with these devices – they are still functioning perfectly fine,” he said.

“There’s really no reason to upgrade.”

Other new features of the iPad Air 2 include an eight megapixel rear camera that can now capture slow-mo videos at 120 frames per second. The front camera has also been upgraded to allow in more light and take a rapid succession of selfies. 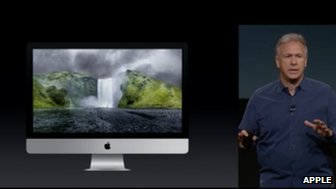 In addition, the machine includes a new type of wi-fi chip that supports faster data speeds, including downloads at up to 866 megabits per second (Mbps).

“It is disappointing – particularly to enterprise buyers – that there wasn’t a 12.9in [32.8cm] iPad model,” said JP Gownder from research firm Forrester, who otherwise praised the update.

“In order to return iPad to high growth, form factor innovation will be required.”

The new tablets will become available to buy next week at similar prices to before.

Apple also introduced a new model of its all-in-one iMac computer featuring what it said was the highest resolution display on the market.

That represents four times the number of pixels found in the standard iMac of the same size. 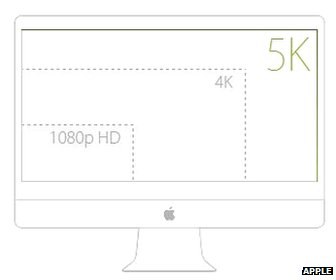 Intel and Samsung have also announced plans to manufacture 4K screens for other all-in-one PCs.

Otherwise, large ultra-high definition display are still a rarity in the computing sector beyond the use of separate monitors, which may aid demand for the new computer.

“There is a huge difference in quality once you start moving through the different sets of screens,” remarked Ranjit Atwal, research director at the tech consultancy Gartner.

“Given the amount of consumption people are doing of online video, and the quality of what they can get from services like YouTube and Netflix on 4K TVs, they want to see that replicated on a PC as well.”

Apple suggested that people doing visual productivity tasks, such as photo editing, would also benefit from the innovation. 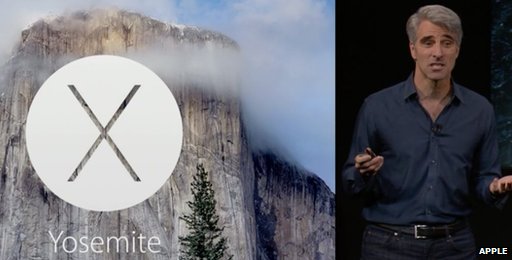 Apple also announced an upgraded version of its screenless computer, the Mac Mini, but there was no mention of an update to its Apple TV set top box, which last received a hardware refresh in March 2012.

The company also said that the latest version of its operating system for Mac computers – OS X Yosemite – was being made available for download this Thursday.

The software allows data to be swapped back and forth with iOS-powered iPhones and iPads more easily than before. Its user interface has also been designed with higher resolution screens in mind.

The company added that version 8.1 of iOS, which introduces support for its near field communication (NFC)-powered payment service Apple Pay, would be released on Monday.

In this article:iPad Mini 3 tablets