It’s hard to believe there’s a secret lake in New Zealand, a country where lakes take centre stage, from ice-blue glacial tarns to steaming, acidic volcanic pools. Even more surprising, this little-known lake is hidden in plain sight – on an island in one of the country’s most famous lakes, where thousands of tourists flock to photograph a single willow tree in the water. But most New Zealanders have never heard of Arethusa Pool, a freshwater lake on the top of Mou Waho Island in Lake Wanaka, in the Otago region of New Zealand’s South Island.

As we watched, gentle ripples ruffled the surface of Arethusa Pool, smudging reflections of the fringing native vegetation, so the lake looked like liquid pounamu, the greenstone gem treasured by New Zealand Māori. Two tiny rocky islands, resembling bonsai landscapes, adorned the lake like the upper-most decorations on a tiered wedding cake – for they are islands in a lake, on an island in a lake, on an island in the ocean.

In a country also renowned for epic views, this is up there with the best. Arethusa Pool is a tarn formed by glacial scouring in the last ice age. It appears suspended 150m above Lake Wanaka, which in turn is surrounded by range upon range of serrated mountains, including the spine-like Southern Alps that run the length of the South Island, some still snow-tipped in late spring, others swaddled in folds of cloud. There’s no sign of civilisation, no hint of Wanaka township, just a 30-minute boat trip away.

But there’s more to this island than breathtaking vistas. Mou Waho, meaning “outer island”, is the largest of four significant islands in Lake Wanaka. The 120-hectare bedrock pedestal is also a predator-free sanctuary protecting some of the country’s most unusual endemic species, yet it’s freely accessible and overnight camping is permitted. It wasn’t always like this though, explained Chris Riley of Eco Wanaka Adventures, who has been taking visitors to the island on half-day tours since 2006. 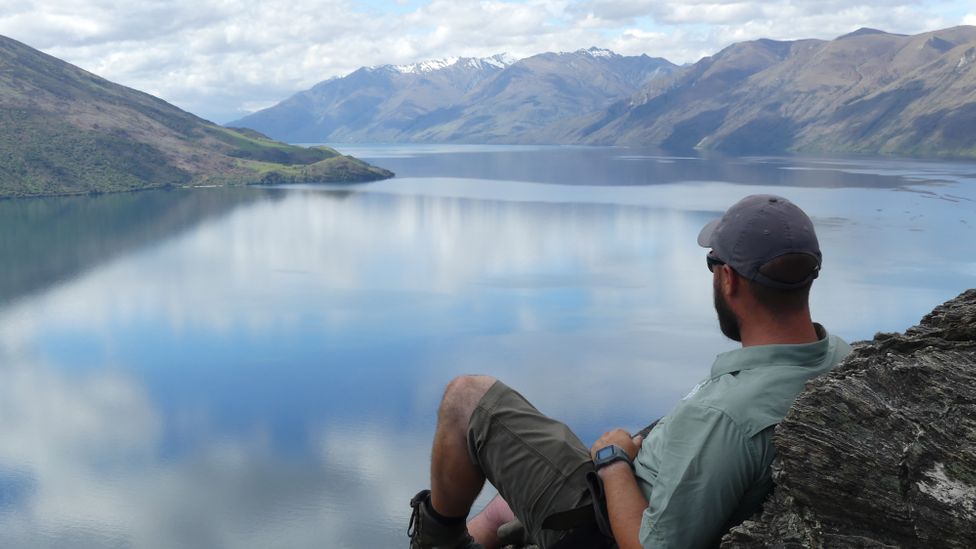 In 1988, the Department of Conservation (DOC) took over management of Wanaka’s islands and commenced pest eradication programmes, trapping rats, mice, possums and stoats and felling wilding pines. Community planting days reintroduced native trees, and in 1995 Mou Waho was declared pest free, paving the way for the reintroduction of an endemic bird that had been missing from the South Island for almost 100 years.

The buff weka (Gallirallus australis hectori), a flightless rail about the size of a hen, disappeared from mainland New Zealand in the 1920s due to habitat loss and predation by ferrets, weasels and stoats. Ironically, these carnivorous mammals were imported in the late 1800s to control rabbits, which had been introduced in the early 1800s by European settlers for sport and meat. But the introduced mammals found flightless native birds easier to catch and are implicated in the extinction of several species. It’s estimated that non-native predators, including possums and feral cats, kill up to 25 million native birds a year, prompting New Zealand’s ambitious Predator Free 2050 eradication programme.

Judiciously, in 1905, 12 buff weka were transferred to New Zealand’s Chatham Islands, about 800km east of the mainland, where they flourished. In 2002, a joint programme between Otago’s Ngāi Tahu Māori community and DOC translocated 30 buff weka from the Chathams to Wanaka’s Te Peka Karara Island for acclimatisation and breeding, with the aim of reintroducing them to the mainland. From 2004, 35 weka were released on Mou Waho, where their population has swelled to an estimated 200 birds.

When our small tour group arrived at the island’s landing area, a weka strutted up to greet us – clearly we were trespassing on its territory. Mottled olive-brown, with a sturdy beak and glinting garnet eyes, buff weka are inquisitive and cheeky, renowned for helping themselves at picnics. It strode out in front of us on the walking track like our personal feathered guide. Weka mate for life, and Wally, who resided near Arethusa Pool and was one of the original birds released, raised 29 chicks with partner Sally until his passing in 2020. 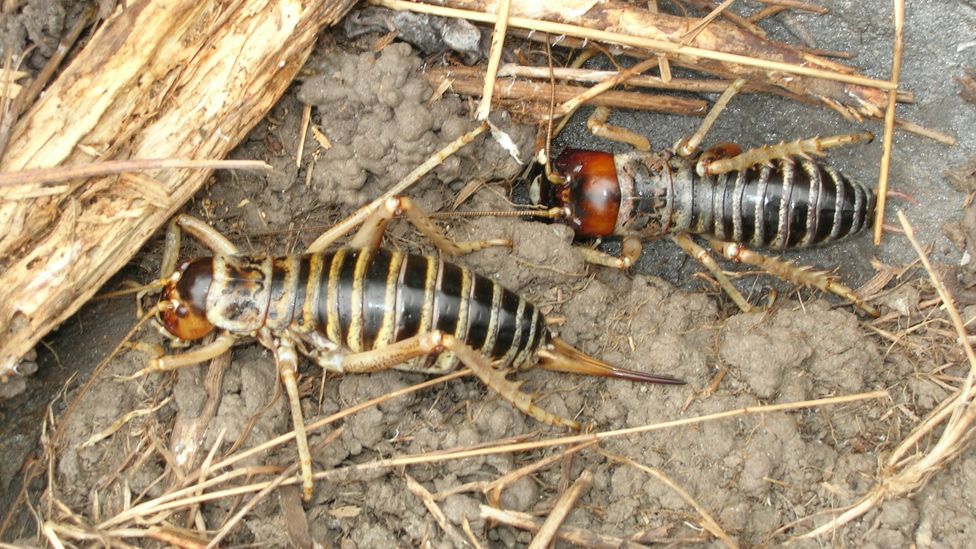 Releasing weka on Mou Waho was not without concerns though, as DOC biodiversity manager at the time, Stu Thorne explained. “Our main concern was that they might decimate some of the lizards and invertebrates, particularly the mountain stone wētā.”

Their name derives from wētāpunga, meaning “god of ugly things”

Native to New Zealand, wētā have been around since before the dinosaurs. Flightless, nocturnal and omnivorous, they look like a cross between a cricket and a cockroach, with spiny hindlegs, a huge head and long antenna. If threatened they lie on their backs exposing jaws and claws, and if necessary, vomit up an irritant. Their name derives from wētāpunga, a giant wētā that grows up to 10cm long, meaning “god of ugly things”.

There are about 100 species, but Mou Waho’s mountain stone wētā (Hemideina Māori) is particularly unusual. Part of the tree wētā group, the mountain stone wētā has evolved to live on the ground amongst rocks. Normally found at high altitudes of 1,000 to 1,500m, on Mou Waho it resides at only 300-475m. But most remarkable is its ability to suspend animation by freezing for weeks at a time thanks to an amino acid in its haemolymph, the insect equivalent of blood, which prevents ice crystals forming in its cells. It can freeze up to 82% of its body to -10C, the highest-known percentage for any invertebrate in the world.

No-one knows the impact weka predation had on Mou Waho’s mountain stone wētā, but Eco Wanaka Adventures co-owner, Lee Eadie, decided she would increase the wētās’ chances by providing “wētā motels” after seeing them at Wellington’s ecosanctuary, Zealandia. With assistance from DOC biodiversity ranger Flo Gaud, woodwork students from Mount Aspiring College designed and built 40 multi-chambered timber motels, the first specifically for ground wētā. The rectangular lidded boxes, placed at ground level in shady locations around the island, are about 30cm long and divided into four triangular compartments, individually accessed via wētā-sized holes. Some have Perspex under the lids, so visitors can see the wētā, where males live with a harem of up to seven females. According to Gaud, it was thrilling for all involved when they found wētā using the motels, and exciting to learn they happily cohabit with Southern Alps geckos, in a win for both species.

Riley and Eadie, who embrace the Māori concept of kaitiaki (environmental guardianship), have planted a native food tree on every island tour, totalling more than 8,000 trees. On our visit, we planted a small cabbage tree near a mature specimen whose spheres of strappy leaves waved like green pompoms against a brilliant blue sky. Starburst flowers of purple and puce hung from tree fuchsias, considered to be the largest fuchsia species in the world, and kōwhai trees dangled bunches of banana-yellow blooms. 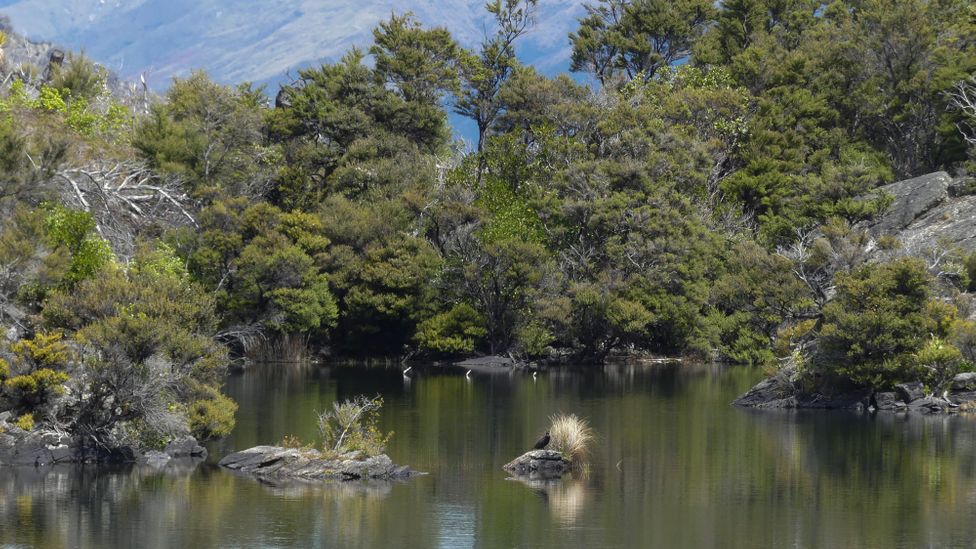 Birdlife is flourishing on the island now, too. As we walked across Mou Waho to a natural rock-seat lookout, tiny tomtits and fantails flited among the snowflake mānuka flowers, bellbirds trilled and chimed and two kererū, native wood pigeons, intoxicated on berries, swooped millimetres from our heads.

“It’s been a conservation team effort, with truly visible success,” said Riley, proudly. “It’s a spectacular ecological result that will only get better.”

In time, Arethusa Pool will again be secreted behind thickets of lush, native New Zealand bush, just as it was before the arrival of Europeans.