I tend to prefer adventure to luxury travel — the rougher, the better — so when I step aboard the Passion, the newest luxury yacht in the Galápagos, I am dubious. Fancy boats aren’t my thing … but a day later I find myself sipping prosecco amid the bubbly warm waters of the rooftop Jacuzzi, reconsidering.

Charles Darwin and David Attenborough have taught us that the Galápagos are unique, thanks to their endemic flora and fauna — species found nowhere else on earth. And because they’ve had no-one sticking arrows in them for a few centuries (Darwin and his crew were guilty of stir-frying a few giant tortoises), the wildlife is unafraid of humans, and this makes for incredibly close encounters. It’s quite rightly referred to by some as “Eden”. But the snake in the garden is us.

Back in the Sixties, when the first trickle of tourists started arriving, the only way to reach the islands was a three- or four-day voyage via freight boat carrying cattle, coffee and dried fish that departed from Guayaquil, in mainland Ecuador, four or five times a year for Santa Cruz.

Nowadays, six flights arrive daily from the mainland and the archipelago is close to receiving a quarter of a million visitors annually. All those feet undoubtedly have an effect — and with the national park setting no limit on the total number of visitors, it’s up to travellers to make informed choices.

Most of us opt to explore the islands on live-aboard ships because the majority of the 70 landing sites — especially the more interesting ones — can only be accessed by boat. But with around 85 registered, how do you make a choice? Vessels carry anything from 16 passengers up to 100 but the owner of the Passion, Fiddi Angermeyer, accepts only 12.

Fiddi was born and raised on the islands; his father Fritz and his three brothers were among the first wave of European settlers to arrive in the 1930s. He knows and loves the volcanic isles: he played a pivotal role in instigating the current format of two week-long itineraries to ease pressure on the sites.

After buying and refurbishing more than a dozen schooners he bought a yacht once owned by the late turkey-magnate Bernard Matthews to “give customers a better experience”, a “floating home” offering barefoot luxury. And who doesn’t enjoy the sunbathing deck, panoramic lounges with widescreen TVs, gourmet dining and those lovely ice-cold mini towels deckhand Roberto proffers us to cool our brows each time we return from our explorations ashore? 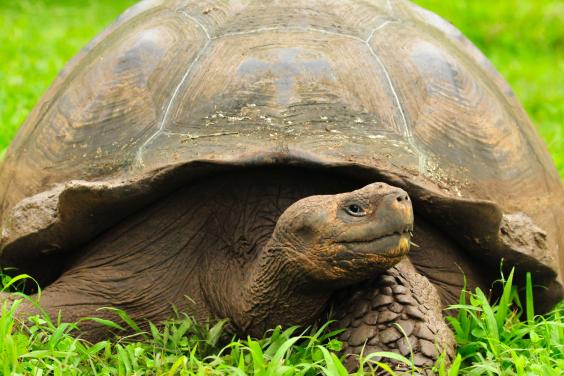 What really counts though is that small boats with fewer passengers generally have less impact on the environment. There are just 10 of us on this voyage. We can ask Carolina, our naturalist, anything we like; there’s no jumping up and down at the back, trying to hear what’s being said. We’re not trampling on plants outside the paths, in a bid to get better photographs away from the crowd.

Soon we reach the shore at Española. Five-year-old passenger Elia runs in and out of the waves and a sealion pup leaps out of the water to join him in his game. At first Elia jumps away in fear but Carolina comes over, crouches down and, putting her arm around his waist, explains that it’s just trying to play. “You can let him touch you, but you mustn’t touch him, OK?” And she holds his hand gently to be sure. The pup waddles closer to sniff Elia’s foot, its whiskers tickling his toes. If we’d been in a big group Carolina would never have had the time to explain the situation. Instead, the event will be something Elia remembers for life. 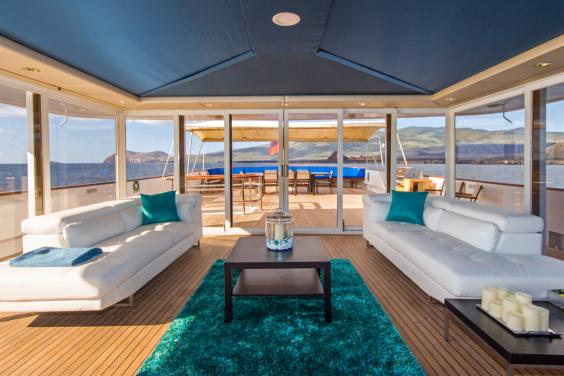 On a trip aboard the Passion

Fewer people also means less noise and less chance of disturbing the animals. As we explore South Plaza — a tiny island carpeted with flaming red sesuvium and the Mickey Mouse-eared prickly pear cacti — we come across a rock slick with blood. The rest of us look concerned but Carolina’s eyes light up. “Look! A cow must have given birth here earlier this morning.” We don’t have to search far to find the sea lion and its pup. They lay a few metres away, by the waterline, nose to nose. The skin between the pup’s flippers is still pink.

In 2010 Unesco removed the islands from its list of sites in danger but the increase in tourists — and residents — is still cause for concern. Driving up into the lush highlands of Santa Cruz we meet the famous giant tortoises, which are capable of living for a century or more. As I stare into the wise eyes of their alien faces, they look indestructible, but life here is fragile. When Lonesome George passed away in 2012 after several failed attempts by the Charles Darwin Research Station to get him to mate, the last of his subspecies died with him — and it hit home that conservation isn’t always successful. Nature is delicate, so it’s best to tread as lightly as possible.

On our last island, I am sneezed on. The culprit is a marine iguana with a spiny black mohawk who has waddled out of the Pacific, come to rest at my feet, and regurgitated the seawater he’s ingested while scraping algae off the rocks.

The cost of a voyage to the Galápagos is nothing to be, er, sneezed at but paying that bit more to travel aboard a smaller boat is a small price to pay to keep Eden intact. Occasionally, travelling posh can also protect the places you’re visiting.

Emma Thomson travelled with Cruise the Galápagos (01473 890499;cruisethegalapagos.co.uk). An eight-day trip aboard the Passion costs from £4,860 per person and includes flights from Quito to the Galápagos, all meals and activities and the US$100 park entrance fee. Flights from the UK to Quito (via Amsterdam on KLM, Avianca via Bogota or Iberia via Madrid) start at about £600 return.

In this article:Ecuador, Galapagos, Spain