There are not many shows that can lay claim to changing the television landscape during their lifetime, but Orange Is the New Black (Netflix) is one of them. It was the third series ever commissioned by Netflix, after House of Cards and the now-forgotten Hemlock Grove, and the first that made the most of the idea that an audience might be hungry to see representations of itself. Its stories crossed lines of class, race, sexuality and gender and mixed up comedy and drama to such an extent that it confused awards judges. It made stars of its huge cast, and set the template for the modern age of binge-watching. In 2013, when we realised we could watch 13 episodes in a weekend, OITNB figured out how to pace its stories according to overindulgence, rather than the traditional weekly drop-in. 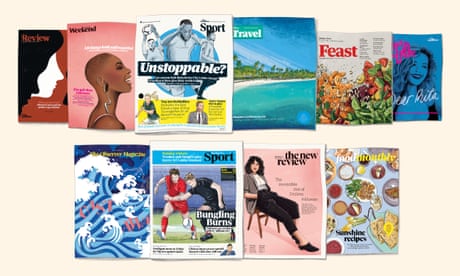 It exits with this, its seventh and final season: easily the best and most self-assured since its debut. While OITNB was always ambitious, it occasionally tripped over its own shoelaces. It dedicated a whole season to a three-day prison riot, which was a bold idea whose execution collapsed into a mess of confusion. One of the main criticisms the show has faced is that it is too depressing. Its warm wit makes you love characters, but then the show does cruel, terrible things to them. Yes, it’s about incarcerated women, so it was never likely to be a cuddly rainbow explosion, but it is also entertainment, not a documentary about penal reform – and there proved to be an upper limit to how much suffering viewers could manage. My moment came when Taystee took the fall for the riot, meaning one of the show’s most beloved characters was dealt the blow of a life sentence without parole. After the earlier death of Poussey, the show’s other most beloved character, it was a horror too far.

But the balance has been restored, just about. Series seven still has moments of gloom so gut-wrenching it is difficult to watch, but they feel earned rather than punitive. Characters who have long been in need of a plot have finally been given something to do again. Piper, our original “Trojan horse”, is out on probation, and becomes a walking demonstration of the labyrinthine bureaucracy that makes life difficult, if not impossible, for recently released prisoners. Once again, she survives it, but only because she can call in favours from the society she was born into. The outside world is not as kind to others, such as Black Cindy. The show has always been very good at illustrating the reach of white, wealthy privilege.

The outside world looms large here. There is a clever, light #MeToo storyline that is brave in the way it hands out its sympathies, making it all the more probing and thoughtful. Litchfield now has an immigration detention centreattached to it, and if Piper thinks she’s struggling in a tangle of barmy regulations, it has nothing on the sheer insanity of the mass detentions and deportations, which make a tidy profit for the corporation running the ship. (The show’s anticapitalist streak has always been fun.) Phone calls must be paid for, but there is no money. The prisoners can’t talk to their children, because they don’t always know where their children are. They are thrown a lifeline in the form of Gloria and Red, who run the kitchen, and set up an underground legal network, one of the main threads that ties the season together.

The show mostly resists the temptation to say goodbye with a greatest hits tour, but it certainly gets the band playing some familiar tunes. It will be hard to find any fan with a complaint, given that all the favourites, and some surprises, get at least a little screen time, especially in the final episode. Even the chickens make a comeback. Not all of it works – Daya’s evolution into ice-cold top dog is cartoonish, for example – but it never lacks heart. The season really belongs to Taystee, who is struggling with the injustice of her sentence and the Sisyphean task of fighting it, and to Pennsatucky, trying to make something of her life inside.

But for all of its crowdpleasing, its message is ultimately one of futility. There are small victories, and occasional triumphs, but mostly, the wheels just keep on turning the same way they always did. It is a bittersweet note to end on, but it is utterly true to itself, and Orange Is the New Black has always been that.